The Martian and Interstellar, Two Films Mandatory For Astronomy Enthusiasts 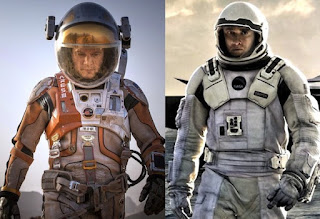 The Martian and Interstellar, Two Films Mandatory For Astronomy Enthusiasts

Rarely ya movie review. But as a fan of astronomy and also as a partner to translate contentnya NASA APOD site APOD-ID.COM (huehueheu first promotion yak), of a light posts are not to be missed.

The Martian and Interstellar, fit enough to be compared to one another. But I would not choose which one is better, both very nice kind of science to represent the film packed a pretty solid theoretical astronomy. Is special because both films are equally displays the character played by actor Matt Damon, who in both films are equally instrumental become an astronaut stranded. Many are deceived and one would have thought that the two films are related, but different altogether.
Synopsis The Martian

Adapted from a book of the same title, the film is able to describe the space adventures with detail but light enough to digest. A team that has a mission on Mars for several sol (Martian day unit = 24 hours 39 minutes 35 244) exposed to large storms and had to abort the mission and returned to planet Earth. Accidents happened when one of them is Mark Watney (Matt Damon) lagged because of suspected of having died from the storm.

Long story short, it turns out Mark Watney still alive! This is where the core story of the film began, how he can survive on limited food supplies even without any means of communication to ask for help to other teams or astronauts to Earth. Alone, living in a barren dusty planet is 80 million kilometers from the home planet Earth.

Views of Mars shown is real as real conditions, very pretty and outstanding, as well of course, very vicious ... until one day when God allowed man to conquer the planet and colonize there.
Synopsis Interstellar

The film also contains adventure Interstellar space is no less detailed and dense, although for some people who rarely read about astronomy is too heavy. But the story is no less interesting. A team of astronauts who are trying to penetrate the space and time to find a planet habitable, due to our planet Earth at that time was dying.

Various objects displayed in exotic astrophysical theories ranging from the wormhole, black hole (black hole), foreign exoplanets up to 5 dimensions as advanced from fourth dimension of space and time. Although seemingly fiction, but all that is shown is "real" in theoretical physics and mathematical calculations.

The rest, besides the aim of saving mankind from the threat of extinction, the film also features a love affair between close family members .. that through the boundaries of space and time to millions of light years.
Notes and Review

The Martian noticeably simpler both sides of the story and visualization, but the course becomes more focused and sharp, and it makes sense for most viewers. With the conclusion of the film is clear, namely to save the life of a human being and bring him back to Earth .. leaving dusty planet Mars.

While Interstellar much more complex, story and plot her even to be seen a few times to really understand. And indeed many astronomy enthusiasts who watch this movie to many times. The story is a bit fragmented, it is not just about saving humanity, but also about the love between a father and son. The Martian opposite of the main characters trying to leave the planet Mars, in Interstellar .. astronauts left Earth dying full of dust and it will be like Mars.

Which is sweet in The Martian is the emergence of the Pathfinder, a robotic rover that was launched in 1996. Well how come? Please watch yourself deh.
Soundtrack

Soundtrack The Martian feels really pop, featuring songs that are popular in the Earth, possibly meant to fight lonely for venturing to Mars. While the OST Interstellar .. hmm how ya, Hans Zimmer has lah .. full of magical instrument that makes a curious, strained simultaneously ringing #halah.
Delay Communications

In both films, the characters are equally face the problem of communication delay. Of course, because the speed of the wave is only 300,000 km / sec while the distance traveled millions of kilometers. The Martian delay of about 30 minutes, Interstellar communication delay of up to an annual .. and only one direction (information only from the Earth).
Lonely

Two of these films depict loneliness and solitude perhaps the greatest ever faced by humans, in the course of life (not in the grave hehehe). Mark Watney survive alone on Mars arid, Dr. Man alone on the frozen ice planet and Dr. Brand Edmund stranded on the planet Mars are very similar. Everything seemed inspired Robinson Cruise.

How so it seems, on its own, sat, millions of kilometers from home on Earth, looking at the sky a strange, barren land. And must survive.
Water on Mars and NASA

The discovery of evidence of the existence of water on Mars was too coincidental and fitting time with the premiere of the film The Martian. NASA is very highlighted public institution's transparency, because it uses an unusually large budget. So sometimes they have to "dramatize" a discovery for the world to support them. However the target man reached Mars in 2030 requires the support not only of their country, but also of the world. In the film Interstellar matter, NASA continues to be an institution that is described as the only hope of man, with a little "manipulation".

Thus, Interstellar and The Martian .. was equally good, equally would be astronomical films of all time. Hope it is useful.
Cover

I've pesen book The Martian written by Andy Weir, who reportedly is more complete than his film. Then will I read while coffee and listened to OST Interstellar ... hehe seems more fitting.
Diposting oleh Tankian di 18.15